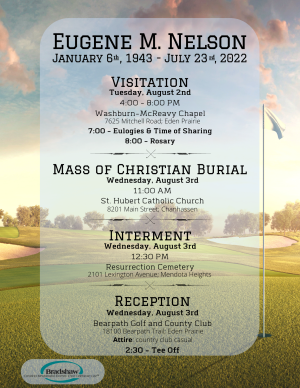 Nelson, Eugene M. (“Gene”), age 79 of Eden Prairie, died unexpectedly in a swimming accident while vacationing in Missouri on July 23, 2022.  Gene is preceeded in death by his parents, Arnold and Marie Nelson; his sister, Delores Sneberger; his honorary mother, Sue McLaughlin, his mother-in-law, Mary Boisvert; and his brother-in-law, Robert Boisvert.

Gene graduated from Roosevelt High School where he lettered in wrestling and shined in football and track.  After graduating high school, he attended St. Thomas University and then served in the US Navy aboard the USS Coral Sea.  Gene had a love of cars, especially corvettes, so after he was discharged from the Navy, he bought his first corvette in Hong Kong, had it shipped home and went on a road trip across the USA and in his words, “he played” Route 66 enjoying his freedom by sleeping under the stars.    Gene owned many corvettes over his life, but he also loved his recently purchased collector 55 Chevy Belair as it was the first car he owned as a young man.  Gene loved his toys and a visit to his mancave, or his home garage was evidence of that.  When Marge suggested it was time to sell off his two Harley’s she arranged a date night to go look at a Slingshot and he was hooked; it became his new favorite ride.

Shortly after his service, Gene and his third-grade friend, Frank Lang, bought a nine-unit rental and realized they had a knack for real estate and property management.  After three years of experience with Griffin Co, Gene and Frank left to form Lang Nelson Associates, which now proudly manages 2000 units spread across 16 communities in the Twin Cities including multi-family, 55+ housing and assisted living communities.

As the co-founder, leader and visionary of Lang Nelson Associates, Gene exemplified kindness, professionalism, and character within every interaction and represented Lang Nelson and the industry with excellence.  In addition to being the boots on the ground leader, he provided stability, loved a good laugh, and touched every person no matter what role they played with grace and kindness. He was a leader to many, and a friend to all.  With Gene’s leadership and eye for detail he was the vision behind several communities that Lang Nelson built.  Gene would dream about the landscape, the amenities and the services that would make living within a Lang Nelson community an exceptional experience.  Each of the Lang Nelson communities are meticulously maintained thanks to Gene’s watchful eye and he was fond of developing and beautifying every square inch of each of the Lang Nelson residential and commercial communities.  He spent each, and every day making sure that when you drove into any Lang Nelson community, you felt at home.

Proudly, in 2019, Gene was recognized in the Minnesota Business Journal’s Top 500 Most Influential Business Leaders in the multifamily housing industry. His acumen, and desire for quality, community and relationships was one of the reasons Lang-Nelson has won 138 MADACS awards for excellence within the multifamily housing industry. This year Lang Nelson celebrated 50 years in business.

Gene enjoyed sports and he participated in a wide range including weightlifting, baseball, volleyball, snow skiing, water skiing, snowmobiling and boating, but once he took up the game of golf at age 50, he quickly became a golf fanatic and was never far from a course.  He was famous for playing every public and private golf course in the state of Minnesota.  Golf was such a big part of his life the past 10 years that he bought a professional golf simulator so he and his friends could play in the winter months, smoke a good cigar and laugh non stop.  Gene was all about having fun and he shared many adventures with his wife Marge as they traveled frequently to golf all the top golf courses both nationally and internationally.

Generosity was a big part of Gene, to family, friends, and the community.  He was frequently sharing with others and looked for ways to make their lives more fun.  It was important to Gene to provide scholarships to his grade school, Saint Helena’s, he built the St. Thomas Ice Arena and the Grotto for Mary at St. Thomas Academy, and contributed regularly to many other charities.  Gene’s legacy, his passion and his beautiful heart will be forever with everyone who knew him.

Visitation will be 4-8pm Tuesday, August 2nd at Washburn-McReavy, 7625 Mitchell Road, Eden Prairie, with eulogies/time of sharing at 7pm and rosary and prayer service at 8pm.

All are welcome to attend a Celebration Reception in Gene’s honor at Bearpath Golf and Country Club, 18100 Bearpath Trail, Eden Prairie, teeing off from 2:30pm-6:30pm.  There will be time to share stories.  Country Club casual attire please.